Start of a new project… FlightMap

I wasn’t joking when I said I was gonna build an app. I’ve got the bones of it working now. I can get the geolocation info out of flight simulator via a windows server app I wrote and send that data over UDP to an android client app using the Google maps api. I can update it a little faster than 1 time a second in order to allow the maps app to refresh. Any more than that and it looks like Google maps can’t render fast enough. At least that’s how it is on my phone and on my tablet. Both are pretty high end tho.

Now that the bones are done it’s time to play around with some UI stuff. I’m planning on wrapping the map in a kinda GPS look and feel and then on large tablets I’m going to add some gauges to the right side. Right now I’m planning on bearing, airspeed, alt, and fuel. For phones I’ll come up with a different ui later that will likely switch between map and gauges.

Having a lot of fun building this.

I’ve been trying to find a way to get a second screen on my pit for a while now. I was at home depot yesterday and they had a tablet mount for $20 so I bought it. The mount that they had was not going to work for me but I figured out a way to change out the arm for something that would work on my pit. It works really nice. There are lots of good apps for the iPad but not so many for android. Right now I’m using fsMoveMap which is ok but there are a bunch of features that I want that it does not have. I think I’ll work on building my own moving map app for android over the next few days. I want something that will fit aesthetically with my pit 🙂

Here’s a video and a pic of it all working 🙂 very happy with how it worked out. 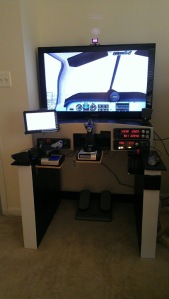 The biggest change to the SimPit is an upgrade to a 40 inch screen :). The wife didn’t think it would be possible but it is HAHA. It really makes such a huge difference. I’ve also done a quick video of how it all works with Flight Simulator. I’m really pleased with how this all came out. I still need to paint the mounts for the stick and throttle black. It’s always that last 1% that takes forever to get done 🙂