I originally bought  an ASUS MeMO Pad ME172V-A1-GR 7.0-Inch 16 GB Tablet to do some extra testing of FlightMap with. Amazon was having what looked like an amazing deal on the tablet for only $80 so I thought how bad could it be right? Asus, the maker of the Nexus 7, makes it so it can’t be to bad. It had good enough reviews so I picked one up. 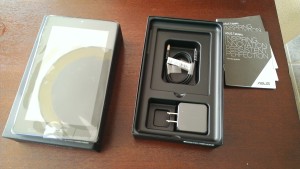 I love Amazon Prime so it arrived to the house within a day. I’m always impressed by them. Opening the packaging was very promising. It was packaged very similarly to the new Nexus 7 even including the same charger and cable. It was right away clear that the tablet was very similarly sized to the Nexus 7 while the screen area was noticeably smaller width. Height wise they looked the same. The tablet screen also has an almost grey look to it that I didn’t notice until I sat it next to the Nexus 7. 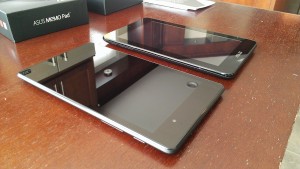 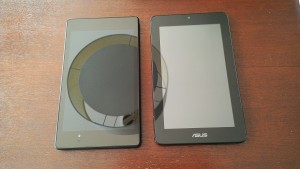 Hardware spec wise it’s a pretty base tablet. It has a single core A9 processor with 1 gig of ram and a separate GPU. It has a front and rear camera but neither are anything to write home about. The one nice thing that it has is a Micro SD slot. This is something missing on the Nexus 7 and it’s nice to see it here. All of this is servicable and the tablet actually performs quite well on android 4.2 (update came down after startup and updated it from 4.1). YouTube videos played OK and Netflix also worked well. It’s not a speedy tablet by any means but it was better than I was expecting for a single core device.

Where the tablet falls down completely is the screen. Most of these cheap tablets make sacrifices and unfortunately for this one it was the screen. This has to be the worst screen I have ever seen on a tablet. The viewing angles are atrocious and the colors are completely washed out from any angle. I could not find a comfortable angle to view the screen at that I could see all 7 inches of screen at the same time. It almost has the polarizing effect on the eyes that caused me a horrible headache after minutes of use. The resolution does it no favors either. A 3 year old Archos 7 tablet not only had better viewing angles than this tablet but somehow the text look better on at the same time even though they are the same resolution (1024×600).

The good news is that FlightMap worked flawlessly on the single core tablet and looked quite good on the 1024×600 screen. It performed well and looked pretty good even on the crappy screen. It is actually pretty nice weight wise and feature wise. It does feel cheap in the hands but that’s pretty much to be expected at this price. There does seem to be a lot of space in the case so it doesn’t feel dense at all. I bet they could have made it a lot thinner without changing any internals. 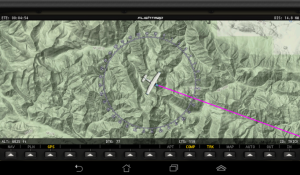 In no way can I recommend anyone purchase this tablet. The screen makes it completely unusable. Asus does provide some nice utilities with the tablet but they are completely lost when you can’t see them.